This is a set of posters designed to advertise a Buckminster Fuller Exhibit.

The Bucky Fuller poster project featured three posters (with an alternate color pallete for one of them) that were part of a campaign to advertise an exhibition featuring the ground-breaking designer. The posters needed to feature the works and imagery from the life and work of the designer as well as draw some themes and communicate those through the typography and graphics in the posters.

The initial sketching was done to get my mind working out a visual approach to the message of the posters. This included extensive research into the life of Buckminster Fuller and his design work. I quickly found possible themes to use and material from which to build graphics. Of note are the Dymaxion map, car, house, the geodesic dome, other various dome designs, and the concept of "Spaceship Earth" which centered on the idea that the earth is traveling like a spaceship in space and humanity must make the best of it. 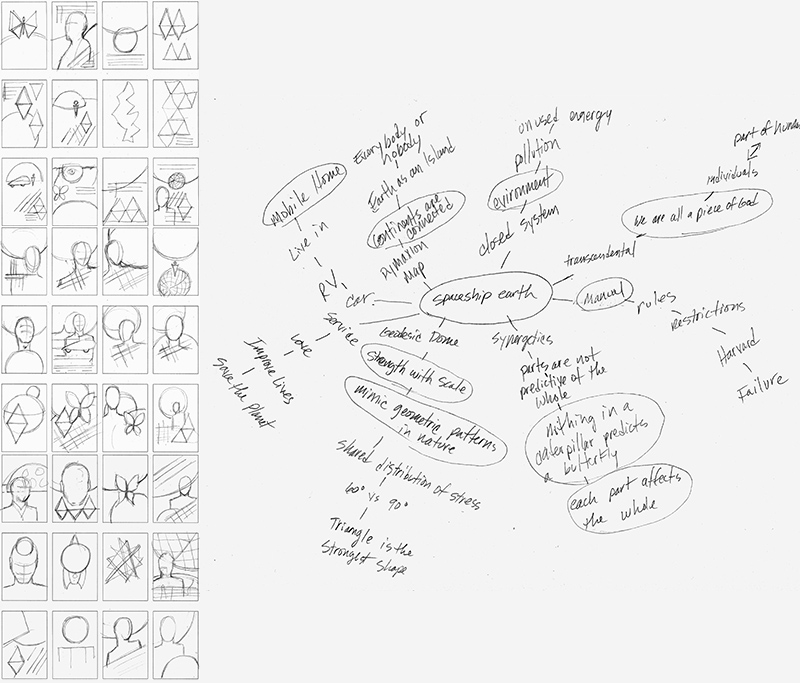 Collage is a useful technique for quickly experimenting with layouts. I printed and cut out several possible elements in order to mix and match and study the possible layout approaches.

The success of the various pieces varied and testing them visually confirmed some hunches and revealed more possibilities.

One of the first discoveries was the change injected into a static layour by rotating the elements. Even in the early collage, there was a strong idea emerging that reinforced the isolation of spaceship earth, and using type alignment, a space structure could be visually implied.

Bucky Fuller had a long career so photos from both early life and later years could be considered as photo elements. 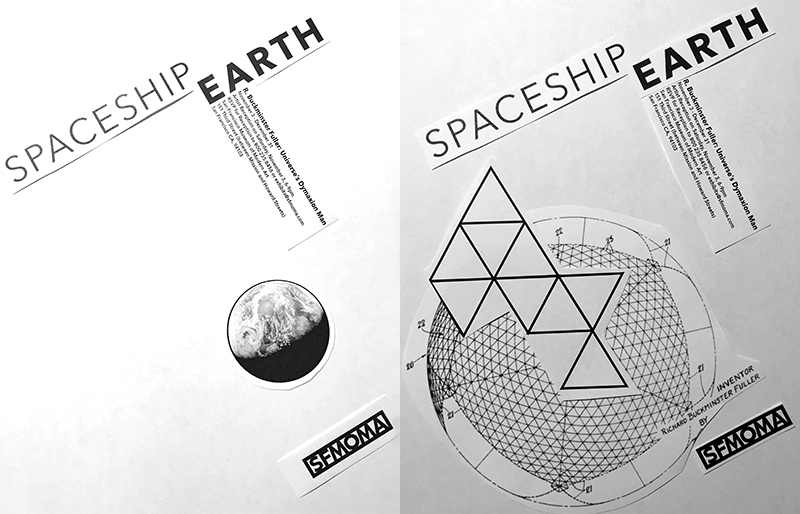 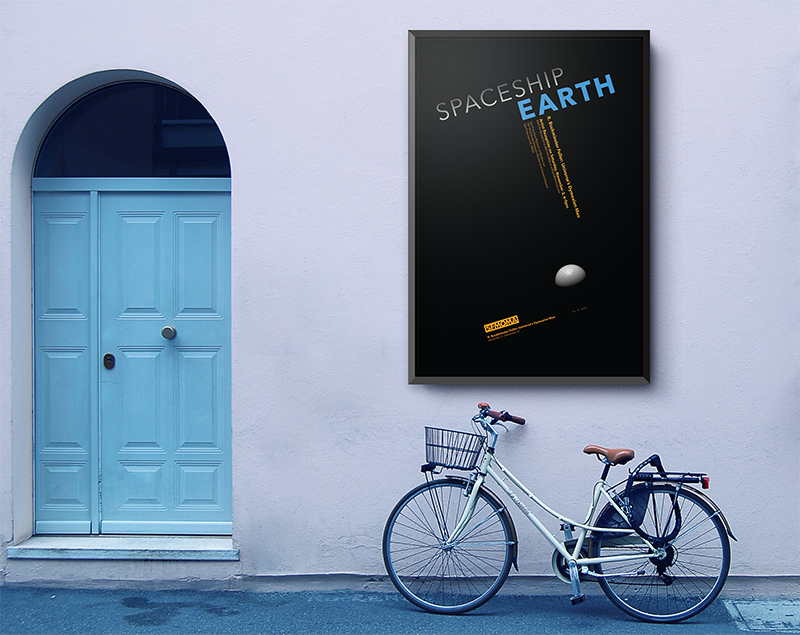 The first poster that was finalized almost exclusively featured typography. This version emphasised isolation of earth as a vehicle for humanity. It used a 3d rendering of a geodesic dome to represent earth.

This is the most sparse of the compositions, but the type concept is effective at creating the isolated feeling of space. It also serves as a good framework on which to build the other poster compositions. To see a larger view of this poster, click here.

Building on the structure of the previous poster, the photograph of Buckminster Fuller was processed and colored to match the color scheme.

The geodesic dome was enlarged for this composition to emphasize the significance of Fuller's contribution to architecture. The 1967 World Fair dome was probably his most famous dome construction. He was able to construct several domes over his lifetime. It currently houses the Montreal Biosphere in Montreal, Canada. To see a larger view of this poster, click here. 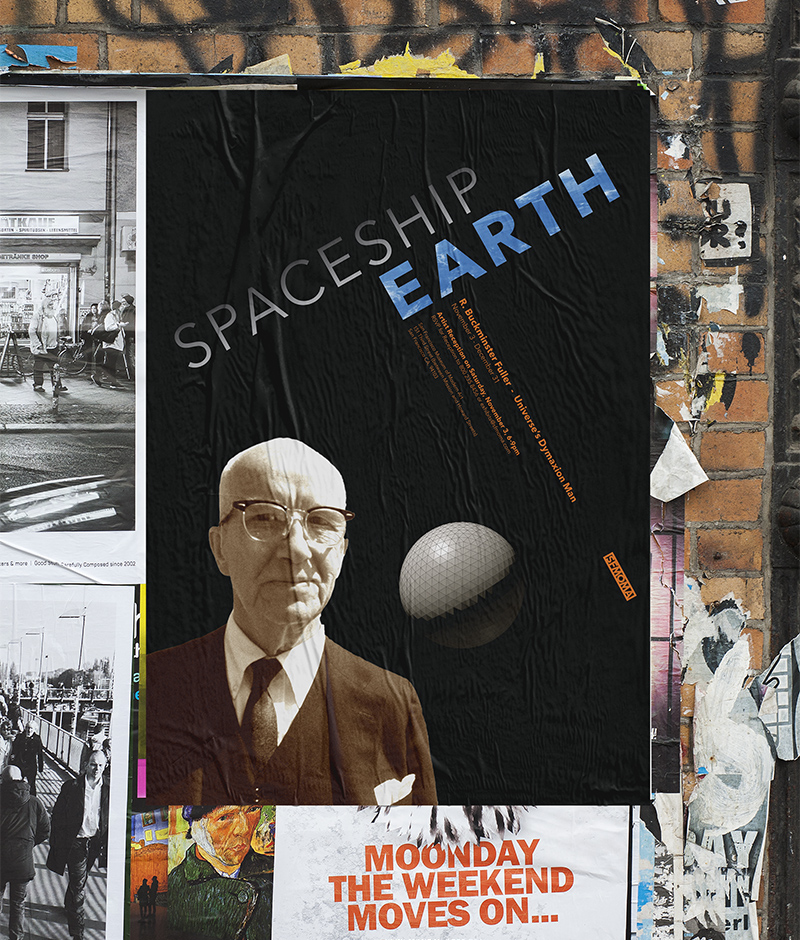 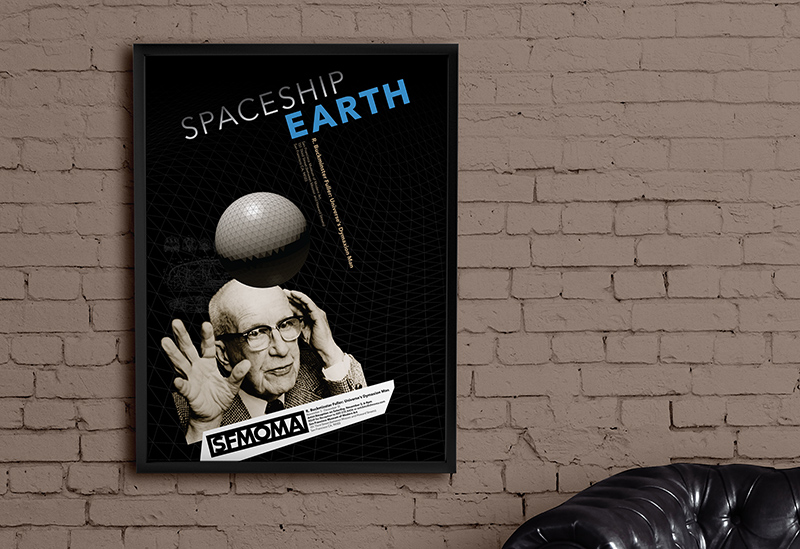 The collage layout features many of the same elements in a more complex composition. The new photo shows the eccentric looking Bucky appearing to toss the dome into the open space before him. The collage cutout contains titling but the original Spaceship Earth title maintains its location and orientation above the composition. An alternate color treatment of this poster was created to facilitate a light version in lieu of the dark where appropriate. 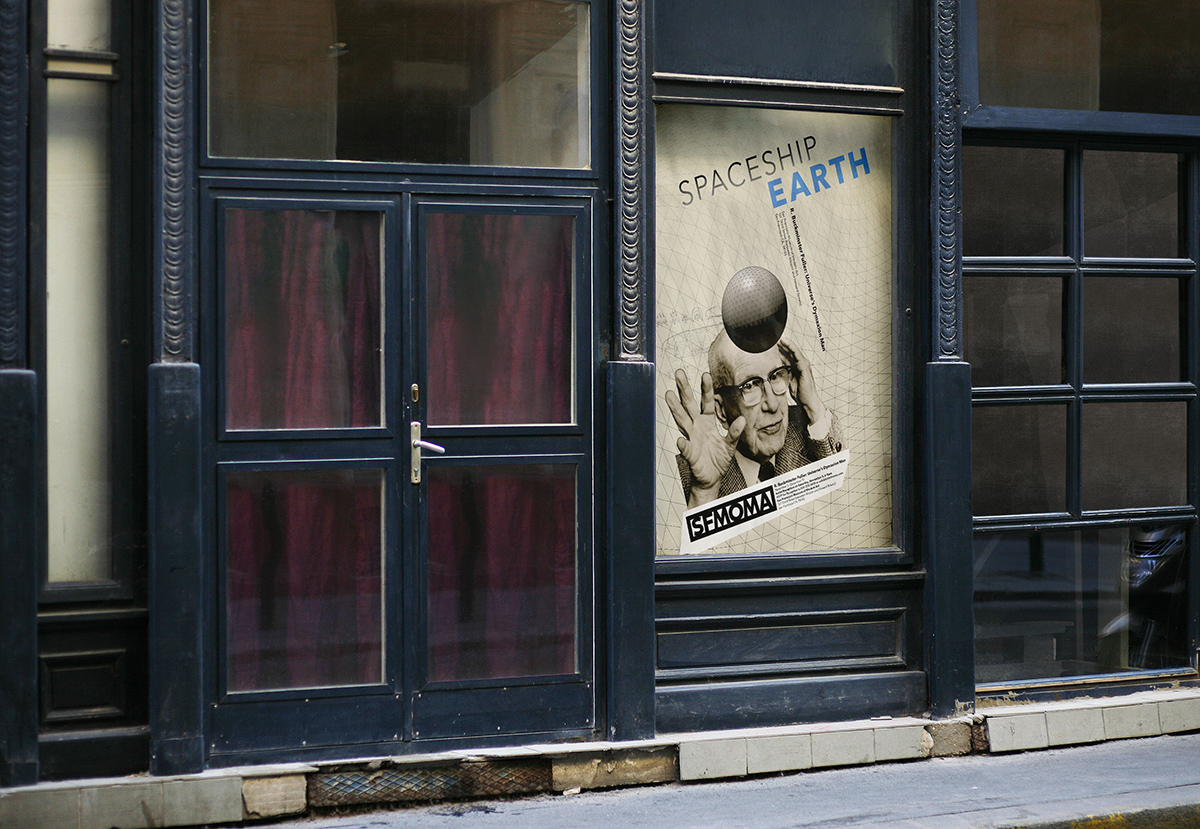